JEsus is made to bear his cross 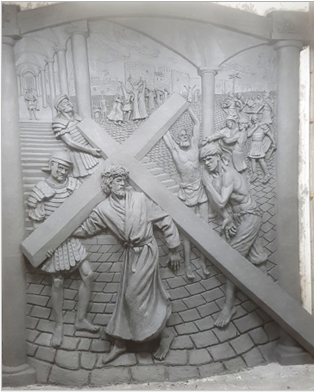 Jesus appearing obedient and cooperates with taking up the cross surrounded by Romans and servants who show both compassion and anger to Jesus. The governor, still high on the steps, is now depicted writing on the Parchment “ INRI”, the Latin initials for Jesus King of the Jews, which will be nailed on the cross.

In the distance Barabbas is now celebrating his recent freedom with a group of wanton friends, one drinking wine while another lustful couple embrace. There are parables and biblical references surrounding this scene; a father is giving his son a snake and a stone, a publican humbly prays beside a Pharisee dramatically praying with his arms outstretched. A man without an eye is poking out another man’s eye.

Mary is overcome with emotion as she tries to break free from the restraint of a guard. John is likewise being held back and threatened.

Become a Patron of the Stations of the Cross Project

Contact one of our Team’s Art Angels to get started…